The new Gibson Les Paul Billy Gibbons Goldtop Aged guitar is awfully nice — but at over nine thousand dollars, it’s also awfully expensive. How much of that Jesus-just-left-Chicago mojo can be summoned for one-sixth of that? The Gibson Studio 50’s Tribute Humbucker Satin Goldtop was meant to be an el-cheapo take on the 1957 Les Paul Goldtop. I had the chance to buy one for well under eight hundred bucks a few years ago and I immediately regretted having done so. The frets were sharp, the finish was legitimate vintage-style nitrocellulose but it was terribly uneven, and the uncovered Gibson 490/498 combination plugged into a one-piece circuit board instead of to traditional control wiring. It was pretty crappy, all things considered. It really only had one thing going for it: it was a real US-made Nashville Les Paul.

I came up with the idea of saving it from the trash heap of history and perhaps stabbing a few sacred cows in the process. The first thing was to have the frets rounded into playability, if not comfort. I then bought a set of Gibson “Burstbucker” pickups on the used market for $125 and wired them up to David Jones’ 50’s wiring kit and vintage Switchcraft toggle. At this point I had about a thousand dollars into it total. I then went into the basement and carefully uncased one of my Holy Grail guitars — the Gibson CC#1 Custom Shop 1959 Reissue. I set up a TASCAM recorder in front of a Heritage Patriot amp. Then I played the same pieces on both the $1000 Tribute and the $8500 Custom Shop guitar. They didn’t sound the same, to my immense relief. But when I put the test up on the Heritage Owners Forum, they almost universally guessed that the Tribute was the ’59 Reissue and vice versa, preferring the tone of the Franken-Lester to the real-deal reissue by a margin of something like sixteen to three.

You can imagine the relish with which I told everybody that they’d mistaken the cheap guitar for the expensive one.

At that point I put both guitars into their cases — the Reissue because I didn’t want to accidentally drop it and ruin a chunk of my net worth, and the Tribute because it still sucked to play thanks to sharp edges and frets everywhere. Earlier this year, I delivered the Tribute to my friend, Melody Burner builder Chris O’Dee, and asked him to make the thing comfortable and playable. One of his subcontractors was on-site to do some pinstriping, so we had him toss a Billy Gibbons style design on it. Chris then rounded everything off, sanded down the sharp edges, and generally put into playable condition.

The resulting guitar is nothing short of brilliant. It easily outplays a Goldtop Standard from Guitar Center and I doubt it’s very far away from the Gibson Custom Shop stuff. The quality of materials isn’t quite up to snuff — multi-piece back, baked-maple fretboard — but you could tour with this thing forever and the only thing that would annoy you would be the vintage-ish slippage of the Kluson tuners. It’s become the great guitar it was always meant to be.

I’m wondering if Chris should offer revamped Tributes as an addition to his hand-built guitar line. Say $1500 for something that plays and sounds and behaves like a proper Les Paul should. In the meantime, I’ll just enjoy this one. From a distance, it might as well be Billy’s guitar. Too bad it will never sound like Billy’s guitar — not in my hands, anyway. 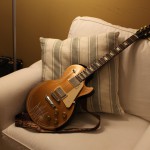 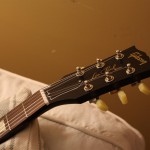 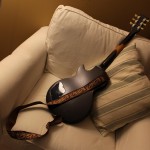 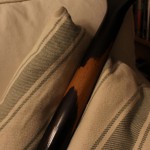 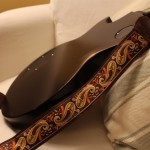 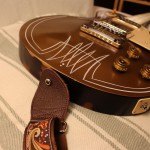 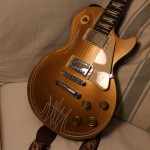 2 Replies to “The Great Pretender”