We led the race.

We led the race. For the first two laps of Sunday’s 45-minute NASA sprint, before the Miatas that made up the other seven entries in my eight-car class got their legs under them and ran me down. Still, at the green flag I was flawless and the 2.4L Neon was strong from low revs and we got the job done.

In a car that has completed exactly one race since October of 2008.

We didn’t hold the lead, finishing 4th of 8 on the wet Saturday 25-minute event and 5th of 8 today.

But we were 3.2 seconds faster than we were in June.

And we got hit a couple of times, too. If you have even a passing interest in club racing, and you have three minutes available in your life, you might want to watch my first lap and contact incident, either above or in bone-shaking high definition. Because I, ahem, put on a Mopar-powered clinic on how to whip the competition at the start. Some of the holes I slipped into should have had… you know what, children read this blog so I’ll skip that joke. But I got it done. They say that Neons can’t fight with Miatas straight up in traffic but I’m out to prove them wrong, whoever “they” are. Here’s the situation. I’m the only Neon left in my class; the other seven cars are Miatas. When I competed for our regional championship in 2008, the Neon’s last full year with a logbook, a 1:44.7 on the Pro course was enough to win. Today, you need a 1:40. Same class, but the cars are much faster. So the 1:45.688 I turned in dry qualifying on Saturday was only good enough for fifth of eight. The race, however, was 39 degrees and raining. I went as high as second at the start and challenged for the lead but my windshield fogged pretty hardcore — my Rain-X application was from 2009, I think — and I fell back in the first lap. I got my right hand free, wiped off the inside of the windshield, got my head together, avoided multiple contact incidents all around me, and took fourth with plenty of room both ahead of and behind me. It was a three-race weekend, but I was concerned enough about the standard of driving I’d seen around me that I made the decision to sit the second day of the race out unless it dried. That was a good choice, because in the very first lap of the second race there were multiple hard hits, one of which brought out the EMTs and red-flagged the whole thing.

You just can’t race NASA-level sedans in what amounts to freezing rain. I was getting wheelspin in fourth gear on the back straight and hydroplaning a foot or more in each direction at over 100mph. Had I been in contention for this year’s championship, I’d have lined up. But since I wasn’t, I went home and took a nap. Sunday was the reverse. Wet qualifying, I took fourth. At the start, I did my level best and before I knew it I was leading the class and in the top ten overall. But my 2007-date-stamp Toyos just couldn’t hold on. I turned a 1:47.570 on the Club Course, which would have been a podium time in 2008 but the top three Miatas were in the 1:41s. While I firmly believe that I am capable of racing on level terms with pretty much anybody short of Fernando Alonso, I just didn’t have the pace to hold them up, particularly after my tires wrinkled and the grip went away.

I believe we can contest for the Regional Championship in 2016. We need new tires, preferably that nice new Hoosier R7. We need to get rid of the 6500-rpm limit so I can run deeper into third gear, and we’ll do that. We may need to lower the car a bit for aero. Right now I’m matching the PTE-class Miatas for power on the straights and I’m holding level with them in the fast turns but in the slow turns I’m getting killed. So maybe a new alignment strategy.

I got hit twice in this race — once by an older fellow in a Spec Miata who didn’t see me (that’s the hit in the video) and once in the back bumper by the eventual fourth-place PTE Miata who was tired of me not being easy to pass. Not a problem, nothing serious was damaged. I’ll be back next year, the Neon will turn a flat 1:43, and I’ll do the rest with racecraft. I’m feeling great about next year.

This could not have happened without some people, who dedicated dozens of hours of their time and effort to bringing the Neon back from suspended animation. I’d like to name them here. 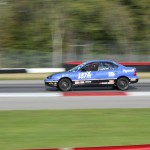 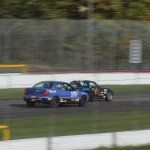 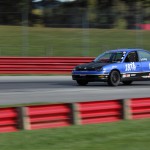 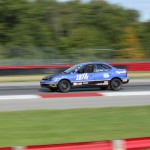 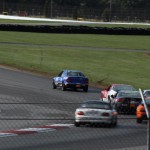 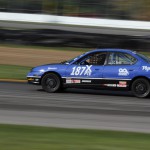