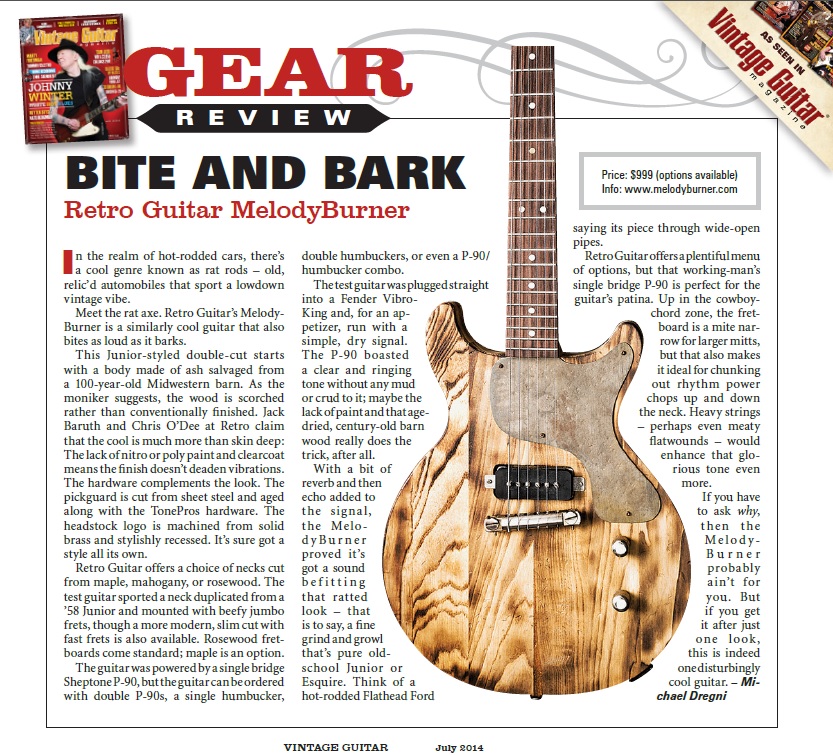 If you’ve been reading here a while, you know that a few years ago I partnered up with my friend Chris O’Dee to design, build, and market a unique guitar. It was called the MelodyBurner.

Two weeks ago, I sold the last of the Burners — my personal guitar, rosewood neck with two humbuckers — to a respected collector in the Heritage Guitar owners community. The production line is silent and the dream is officially dead.

What follows is the whole (not very long) story of MelodyBurner, from Day Zero to the final sale. I’m telling it because it’s a textbook example of how, as my old mentor Big Dog used to say, you can’t want something for someone that they don’t want for themselves. 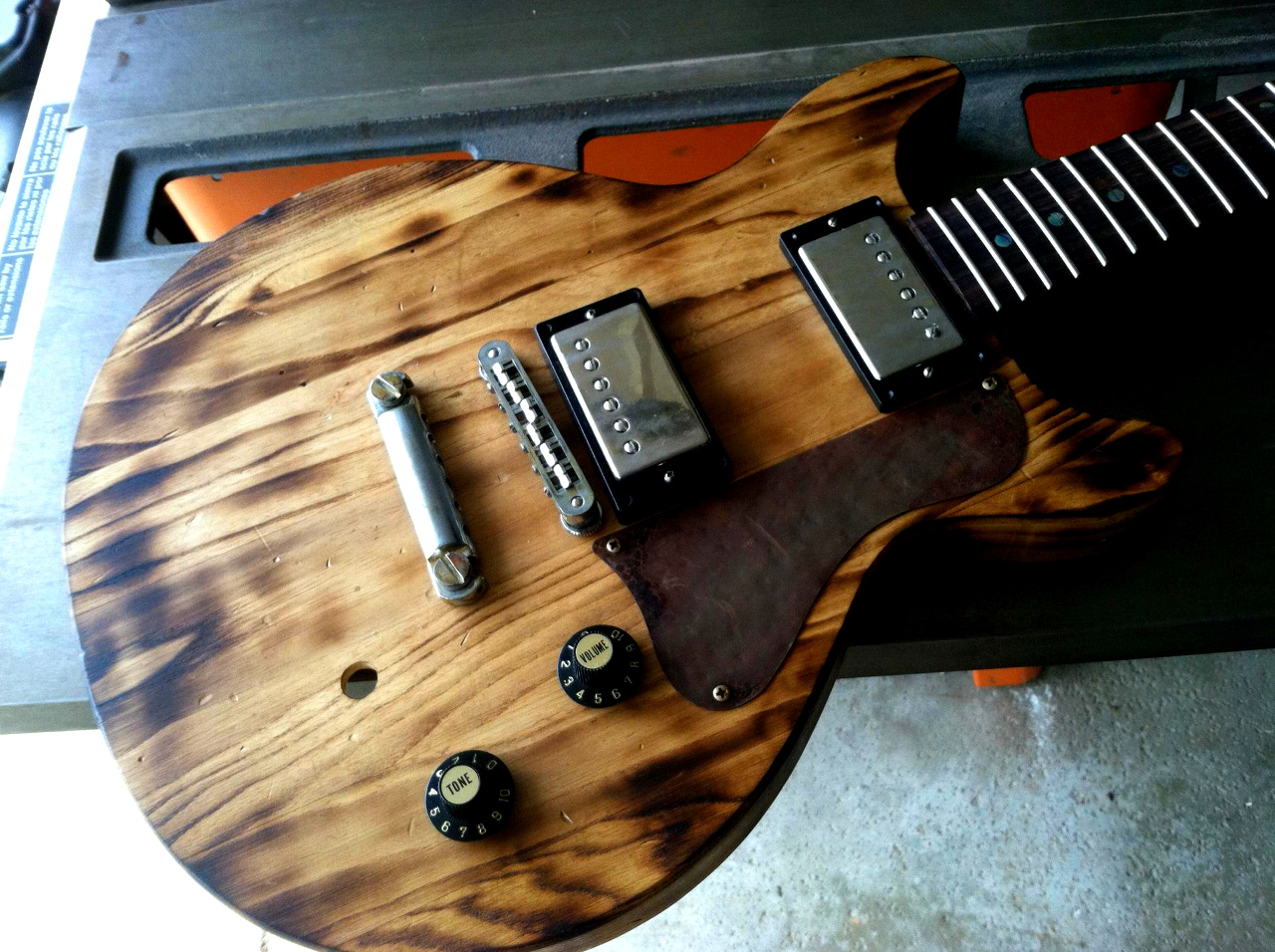 Five years or so ago, I was introduced to Chris by a mutual friend who was a guitar tech for Sheryl Crow, Beck, and a variety of other people making a seven-figure living doing corporate rock parties. At the time, Chris was just getting started doing replicas of famous Gibson guitars from the Fifties. From the moment I saw the first example of his work, I knew that Chris was a major talent. Like Kris Derrig, the infamous builder of Saul “Slash” Hudson’s “Les Paul”, Chris O’Dee was a soft-spoken fellow who preferred to let his work speak for him, and his work was remarkably good.

There are a million replica-Les-Paul builders out there, including Gibson’s Nashville Custom Shop, but Chris just seemed to intrinsically know how to make a guitar feel, and play, like it had been around for sixty years. He also had a knack for meeting the right people and impressing them. Very few guitar builders can say that Billy Gibbons and Bruce Springsteen were playing their products on stage before they’d been in the business five years, but Chris could make those claims and more besides.

I bought a Moderne from Chris, then I commissioned him to do a few other projects for me. We hung out a lot and talked about music a lot and ate a lot of sandwiches. Probably ninety-nine out of a hundred people would have been satisfied with that arrangement. I had something else in mind, however. I knew that the replica business was a difficult and dangerous one, and it always winds up in one of two ways: either you can’t sell what you make, or you become so popular that Gibson’s legal department steps on your face and drives you out of business.

My idea was for Chris to establish himself as a builder of guitars under his own name and design, the same way everybody from Dennis Fano to Paul Reed Smith had done. The problem was in finding a niche that wasn’t already occupied by a dozen or more builders. The inspiration came for me over Christmas of 2012, when Chris stopped by the house to show off something he’d made for Billy Gibbons.

The guitar was a plain square of ash that had a maple neck attached. No truss rod, no fancy hardware. Chris has burned a variety of designs right into the ash body and then distressed all the metal components. The result was a guitar that looked like it was from the future and the distant past all at once. It hadn’t cost him much to build and his plan was to give it to Billy as a gift and a way of saying thanks for all the business that Billy, and Billy’s guitar tech, had thrown his way.

“You need to do something more with this,” I said. “This is the unique product you need.” I sprang into action. I had a friend of mine design a logo, and another friend take that logo and render it in 3-D CAD form. I hired a machine ship in New Jersey to make the logos from solid brass. I gave Chris specifications, materials lists, timelines.

I sent the initial prototype around and secured favorable reviews in WIRED and the print edition of Vintage Guitar. I registered a domain and built a website. I reached out to individual collectors I knew and I advertised the product in various guitar forums.

The interest came thick and fast — so much so that I worried we’d overwhelm Chris, who was still making guitars one at a time in his home shop. The first five prototypes were built and sold. I started to discuss the idea of fully “productionizing” the design, sourcing ash in bulk and hiring a well-known local shop to CNC-mill all the basic parts for us.

Meanwhile, Chris got remarried and decided to move his shop. He said that he couldn’t do any more Burners — but I soon realized that he was making more replicas than ever. He had another logo designed, for “Retro Guitars”, even though he didn’t own the trademark. He used Facebook to market his replicas. He would tell me that he didn’t have time to fill MelodyBurner orders on the same day that he would announce on Facebook that he was building a dozen Les Paul copies “on spec” with no firm orders in place.

I was simultaneously furious and bewildered. I’d created a brand that would turn him into a major builder, using his own name and designs that he couldn’t be sued for copying — but he didn’t want it. He wanted to build replicas. He stopped returning my emails or my phone calls even as he worked to drum up business for replica Bigsbys and Gibsons.

A few months ago, I returned the last of the MelodyBurner deposits and arranged to sell my personal MelodyBurner to one of those depositors, at my cost. I let the domain name expire. It made me sad. Partially because I’d envisioned myself as a long-time partner in MelodyBurner, finally making a mark in the music business despite not being an actual musician. I liked the idea of the product: it was well-made, it sounded great, it was unique, and it was affordable. I figured that there was every chance that we’d be bought out by a major maker and that one day I’d see Korean-made MelodyBurner “Tributes” lining the wall at Guitar Centers around the country.

All the hard work was done already. Most guitar builders can’t get the publicity and the customer momentum they need to get to that proverbial next level. We had that. What we didn’t have was somebody who actually wanted to make them. For a few months, I played around with the idea of making them myself, using the contractors and resources that are already in place around Central Ohio. I ordered up a few slabs of Michigan ash, glued and sized for MelodyBurner bodies. I found a source for the necks. I worked a deal with a pickup manufacturer.

In the end, however, I let it go. A MelodyBurner built without Chris wouldn’t really be a MelodyBurner. It wouldn’t be fair to the customers who thought they were getting something from the same hands that supplied their favorite musicians. It would be a good product, but it wouldn’t have “it”. Whatever “it” truly is.

The last time I talked to Chris, he seemed pretty content. He likes what he does. I wish I had his personal level of calmness, really. It frustrates me to have a conversation with him. All I can think of is this: if I approached writing the way he approaches his work, I’d never have gone any farther than Autofiends. The truth of the matter however, is that I can’t teach him how to be ambitious any more than he can teach me to build stunning ’59 Lesters.

We’ll go our separate ways. I’ll continue to give money to Paul Reed Smith. The Private Stock team and I have similar ideas about punctuality and adherence to the original spec sheet and quality control and whatnot. Chris will continue to build his replicas as time and his inclination permits. I can’t turn him into the next major boutique builder. That’s not who he wants to be.

So: If you were one of the lucky few to get a MelodyBurner, congratulations. You have something that will, I think, eventually be worth a lot of money. In the meantime, you have a guitar that was made to the same standards demanded by any number of platinum-selling artists. If you want a guitar built by Chris but you don’t want to deal with his two-year wait time, contact me; I have a ’59 V and a ’59 Junior, both built for major names in the business.

If, on the other hand, you’re really good at building something but you don’t know how to get to a wider audience, contact me. I have a bit of an unscratched itch, you could say. I want to make someone else famous. But make sure you’re ready for the ride, alright?

11 Replies to “So Long, Melody Burner”