Many thanks to all the people who messaged me about my site being down today. It’s as simple as this. I’ve been using the Franklin Planner since 1994, but a few months ago I decided to try something else. Why not change with the times? Well, I’ll give you one reason: because you don’t remember to renew your domains.

To make matters worse, my registrar account was linked to one of the expired domains… so I couldn’t reset my password and log in from the road. Big oof, as the kids say.

Anyway, we are back up now and I’ll be more careful in the future, I suppose. Thanks for your patience. Oh — and there’s a reason I was out of pocket all day and not able to easily go home to fix the problem. You can see the reason in the photo above.

END_OF_DOCUMENT_TOKEN_TO_BE_REPLACED

Well-respected and ground-breaking automotive blogger Joe Sherlock died on December 29th last year. As with C.G. Hill, I had to find this out from a reader — thank you, davis. I’ll miss Mr. Sherlock; he was one of the good guys.

That being said, due to my own inability to get my act together I happen to be sitting on fourteen book reviews, written for Riverside Green by Joe last year. I’d been waiting on “the right time” to put them up, but as my father once told me about having children, if you wait until you’re truly ready you will never do it. So I’ll start running those in the weeks to come.

Joe’s self-selected “Greatest Hits” can be found here. He always wrote with modesty, decency, and clarity foremost in his mind. It was a pleasure to read and to correspond with him. He will be missed, here and elsewhere. 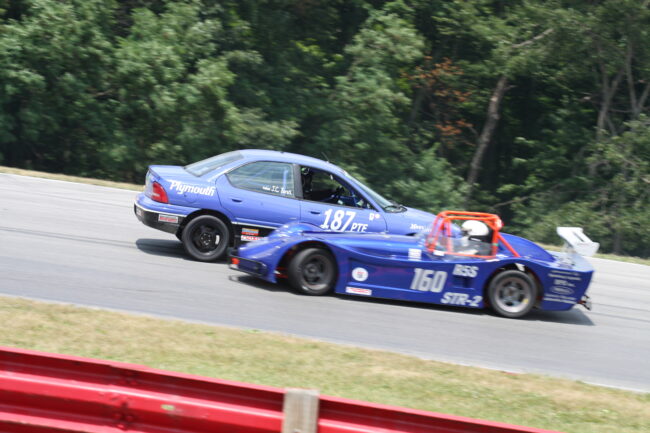 If you’re seeing this, you’re on the new site. If you experience any problems, please let me know in the comments.

EDIT: There’s a problem resizing images for contributors, I’m working on it.
EDIT: And that should be fixed now, contribs please let me know if it misbehaves. “Thirty-four months to the first million and twenty months to the next.” That’s what I said when we hit the two million hit mark in September of 2017. Since then, there’s been an, ahem, flattening of the curve in site growth, which is fine. Depending on how you shake and bake the statistics, Riverside Green has between thirty and seventy thousand real human beings reading it on a semi-regular basis, with perhaps five thousand folks who reliably read everything I publish.

As has become customary on these occasions, I’ll answer a few random questions and then discuss a minor change coming to Riverside Green in the weeks ahead.

END_OF_DOCUMENT_TOKEN_TO_BE_REPLACED

Full ten years slander’d, did he once reply?

Ten years been legit, they still figure me bad

One, as Daniel Craig said in a middling movie, sympathizes. Since my brother and I started this site in March of 2013 I’ve written 1,494 posts for a total of almost 3.1 million words. Recently some busybody went through all of them and identified two paragraphs that upset him (or her), in the hopes that I would lose my job and be unable to feed my family as a result. The only solace I have is that we must have served them a bunch of ads in the process and therefore made a few bucks.

In a perfect world, I’d be able to immediately re-read all three million of those words and see if any of them would hurt anyone’s feelings. Since I don’t have that kind of time at the moment, I’ve unpublished all of my contributions until I can verify that they are compatible with The Current Year. Expect the “Made In The USA” stuff to come back first, because it’s critical to me that my readers still have access to this information. My opinions about music, politics, and so on will be slower to return.

As an apology to my approximately 55,000 faithful readers for this perhaps over-cautious maneuver, I’m also turning off the ads for a while. I’d encourage you to read the great work by Tom Klockau and the other contributors during this downtime. Thank you for your tireless support of the site and for your patience with me as a writer and as a human being.

I’ll close by saying this. About fourteen years ago I looked at the then-current state of automotive journalism, decided that it could use improving, and went on to expend considerable effort in the pursuance of that goal. Not once between then and now have I done anything so weak or reprehensible as to attempt an anonymous subversion of someone else’s career. Yet it happens to me all the time. Not once have I said something in private regarding a colleague that I would not (or did not) repeat in public — but rarely does a month go by without me hearing about someone’s attempts to slander me behind closed doors or beneath the coward’s cloak of anonymity. Never have I tried to impede someone else’s ability to do their job, yet the water of our business fairly roils with overheated, fumbling attempts to make sure I am denied access to a car, an event, or an interview.

If there’s a lesson from the video above, it’s this: Get enough hyenas together, and you can take down any lion. It’s just a matter of time and nibbling, querulous effort. Yet no matter what happens, the lion knows what he is, and he knows what you are. You know it, too. Here at Riverside Green, we’re always looking for ways to

0. Bring you exciting new “content”
1. Milk you for cash

Starting tomorrow, we will be liberally syndicating short book reviews from venerable multi-topic blogger Joe Sherlock. Each review will feature an Amazon affiliate link. If you click it and buy the book, we could make anywhere from two cents to 500,000 dollars, assuming Joe is going to review a solid platinum book at some point.

Which reminds me: I think I promised some sort of vague accounting regarding our advertising program, as well as a general State Of The Site Address regarding traffic. Let’s get right to that!

END_OF_DOCUMENT_TOKEN_TO_BE_REPLACED As of today, I’m enforcing HTTPS redirection to this site both on mobile and desktop. The purpose of this is to both to secure the login information of our contributors and to put a very mild brake on the DoS attacks. Since we outsource some of the image hosting to non-secure sources, you may see “orange” instead of “green” on the site information bar.

If this change affects your browsing experience in a negative way, please let me know. Thank you!

This website has been compared to many other things — the forum at Rome, a collaborative replication of Hunter S. Thompson at his worst, the proverbial dumpster fire — but it’s really more like the Dutch city of Drachten. That’s where traffic engineer Hans Monderman pioneered the idea of “shared space”. In Drachten, there are no traffic lights, no traffic signs, and no road markings. The intersections are completely empty of any instructions for drivers, pedestrians, or cyclists. You might think that this would result in utter chaos and possibly a nontrivial quantity of blood in the streets, but you would be wrong. It turns out that most aggressive drivers actually believe that they have the law on their side. With no law to follow and no rules to obey, drivers begin operating in a cooperative and productive manner. Traffic accidents in Drachten went down after the signs went down — and travel times through the city actually decreased.

The Drachten experiment, successful though it may be, is highly dependent on some external factors. Northern European countries have core qualities of high social trust, high education level, low aggression, and homogenous ethnic makeup. Would you get the same results from this policy in, say, East Los Angeles? Probably not. It’s a small-town strategy, for small-town people. Incidentally, it’s also had some success in the UK, and there’s a nice video in the preceding link to show what happens when you remove traffic signs there.

When I took over as TTAC’s final Editor-In-Chief (for reasons of internal politics and prestige, my three successors were Managing Editors, with the E-I-C title assigned to a person behind the curtain) I adopted a Drachten-esque policy about censorship and moderation. I figured that TTAC’s relatively intelligent user community could be trusted to obey themselves as long as I did not set specific rules under which they would chafe. If you were around at the time, you will remember that my policy worked; the only users we banned were previous TTAC staffers commenting under aliases.

Here at Riverside Green, I continue to pursue the policy of “open spaces”. You can criticize me or Bark, you can express your politics without reservation. This site is big enough for commenters who have studied the Torah their whole lives and for commenters who non-ironically use the phrase “the Jew York Times”. We’ve had a couple of African-American contributors and we have people who are to the right of Richard Spencer. In general, everybody gets along — and I believe that’s because we have no explicit moderation which appears to favor any particular group or person over another.

Unnnnn-fortunately, I’m going to have to make a very specific exception to this policy.

END_OF_DOCUMENT_TOKEN_TO_BE_REPLACED Thanks for your patience while the site was down. It might happen again; we are currently being intermittently targeted by a lightweight denial-of-service attack. If it continues, I’ll have to put the site behind Cloudflare or something similar. It’s not uncommon for us to receive 150,000 fraudulent login attempts in the space of ten minutes, all launched simultaneously from sites across China and Eastern Europe.

In other words, somebody is paying good money for a botnet to knock the site down as often as possible. This is the sincerest form of flattery but it’s also sincerely annoying. Look at it this way: At least we’re managing to serve the current version of the site to non-logged-in users, something with which the poor fellows at TTAC are currently struggling!