While America was busy making rockets and inventing solid state integrated circuits to put men on the moon, an appliance company was using basic physics and mechanics to make an automatic toaster the likes of which has never been improved upon.

“Automatic?” you may ask. Isn’t every pop-up toaster you can buy at Target’s housewares section automatic? Don’t they pop up your toast automatically when it is done? Well, yes, they do, rather suddenly and violently compared to the T-35’s genteel action, but you first have to put the bread in and depress the plunger to lower the bread into the toaster, which puts tension on the lifting springs, and energizes the heating elements. An electromagnetic latch releases when a mechanical timer, bimetal thermostat, or logic circuit decides that the toast is done to your setting. You provide all the force needed, and you turn on the toaster.

A cool piece of kit, no doubt, but compared to a Sunbeam Radiant Control toaster even the most modern, digitally controlled pop-up toaster is Model T primative when put up against the the SRC’s mechanical elegance. You see, with the Sunbeam Radiant Control toaster, you just set your slice of bread (or bagel, this old school toaster has slots that can accommodate fairly thick slices) in the slot, adjust the doneness setting, and the toaster does the rest. The bread goes down automatically, the heating elements turn on and toast your bread, which then rises, quietly and gently, when done.

Here’s a short video of the Radiant Control toaster in action. After the bread is lowered, you can skip to about 40 seconds in to watch the magic happen as it shuts off and raises the toast.

Isn’t that cool? When you’re half awake and waiting for your coffee to brew would you rather be startled by the jarring, spring loaded action of a pop-up toaster, or be gently alerted by a quiet click, followed by your toast being elevated, as gentle as sunrise?

Impressively, the technology was developed back in the 1930s and 1940s and even more impressively, it uses no motors or solenoids. The Radiant Control toaster was the creation of a prolific inventor named Ludvik J. Koci, who worked for Sunbeam and its antecedant company for 37 years. According to his obituary, he also invented and held patents on an early electric iron, Sunbeam’s first electric coffee percolator, and the first electric frying pan, along with electric shavers and electric blankets. He also experimented with electric cars in his 60s. His son, Ludvik Frank Koci, had a long career as an engineer and executive at General Motors, eventually running its Detroit Diesel subsidiary.

Ironically, and erroneously, in that obituary, Koci’s daughter refered to his invention as the “Sunbeam Toastmaster”. Toastmaster was a brand name of the McGraw Electric company, a Sunbeam competitor, which introduced the first automatic pop-up toaster in 1926. As far as I’ve been able to determine, Sunbeam never used the Toastmaster brand for Koci’s invention nor did it license the technology to McGraw.

Everything in the Radiant Control toaster works because of physics and mechanical levers, not powered motive devices. The bread is lowered by its own weight, which also triggers a lever operated power contact that turns on the heating elements. One might think that the weight of the bread also compresses a spring to be used to raise the toast, but that’s not how Sunbeam did it. Instead the toaster uses the force of the contracting ni-chrome heating elements as they cool after toasting, multiplied through classic levers, to raise the finished product. They shrink just a small amount, but with the correct leverage, you can do some amazing things. It all works perfectly and quietly and must have greatly impressed consumers when introduced in 1949 as the T-20. Just a few years earlier they or their parents may have been toasting bread on manual, exposed element toasters that required physically flipping the bread to toast the other side. 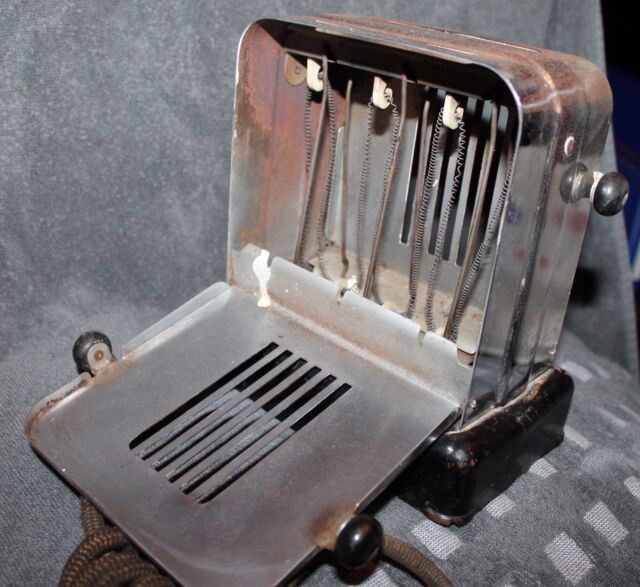 If that’s not impressive enough, the amount of toasting is controlled by the actual temperature of the bread surface, which was measured to be directly proportional to the amount of toasting accomplished to that point. A bimetal thermostat, insulated from the heat of the elements, is aimed at the surface of the bread. When the bread reaches the correct temperature for the doneness setting, the thermostat releases a latch, disconnecting power to the heating elements, starting the lifting part of the cycle.

To get a more detailed idea of how the Sunbeam Radiant Control toaster works, check out the video at the head of this post from Technology Connections on YouTube. He has another video on how to upgrade a SRC with a safer, grounded power cord, and also how to adjust tension on the lowering/lifting mechanism for proper operation. Since this is the 21st century, of course there is a community of Radiant Control enthusiasts, with their own website, Automatic Beyond Belief, the tagline Sunbeam used to introduce their new toaster back in 1949.

Sunbeam started out in 1897 as the Chicago Flexible Shaft Company, which introduced a new crank-driven sheep shearer and then moved into consumer goods. In the 1920s they introduced the “Princess” electric iron under their new Sunbeam brand and in the 1930s, chief designer, Ivar Jepsen, created the Mixmaster mixer, with its novel detachable interlocking blades, a huge success. After World War II, rightly expecting a postwar boom in consumer goods, the company rebranded itself Sunbeam.

Perhaps the most amazing thing about the Sunbeam Radiant Control is not how automatically it works without powered mechanisms, or how uniformly it toasts your bread, it’s that if you want one, you have to buy it used on eBay or Craigslist for between about $50 to $100, or inherit one from your mom or grandmother. The best toaster ever made has curiously been out of production for over two decades. Maybe it isn’t as profitable to make and sell as more primitive pop-up toasters are.

Sunbeam stopped making the Radiant Control in 1997, after nearly 50 years of continuous production. That’s a lot of wedding gifts. A chrome and bakelite mid-century classic, with an exterior designed by Robert Davol Budlong and built like the proverbial tank, the biggest change in that time seems to have been moving the doneness control from a knob underneath one of the bakelite side handles, to a lever at the bottom of the front panel which also incorporated a stop switch to manually end toasting.

While the Radiant Control toaster went out of production in 1997, the latest patent used in its manufacture was issued in 1957. That patent expired no later than 1974. That means the technology and designs are in the public domain and there is nothing to stop someone from putting it back into production. The design is sound. When a product stays in production for a half century without changing the basic design, think Fender Telecaster or Zippo Lighter, it’s likely lasting for a reason. It’s also a reliable design. My T-35 is at least 52 years old and works just fine. Will any toaster, even any appliance sold today at Target last 52 years?

Well, maybe the UK made Dualit toaster will last a half century or more, but charming and durable as the Dualit is, the bread in the Dualit is lowered and raised with a mechanical lever. Also, a two slice Dualit Classic will cost you $180 at Target, far more than a vintage Sunbeam Radiant Control in even pristine operating condition will run you.

The T-35 is also a relatively powerful toaster. Most modern two slice toasters are rated at 800-900 watts, and four slice toasters at no more than 1,800 watts which is the maximum power a 15 amp household circuit will supply. It looks like 450 watts per slice is the modern standard. The two slice Sunbeam T-35 is rated at 1,275 watts, over 600 watts per slice, so it will also toast your bread faster than almost any modern toaster. Admittedly that comes with increased energy costs, but who can put a value on time? A Radiant Control toaster is also more entertaining.

As millenials and others embrace mid-century design and older, more “authentic” technologies like safety razors and vinyl recordings, it’s surprising that nobody has seized upon this opportunity to use that aesthetic to reintroduce an abandoned, yet superior toasting technology. Heck, some Chinese company could do it without even having to steal any tech at all. People raised in the digital age might just like to have a genuinely automatic toaster.

30 Replies to “Why Is Nobody Making the Best Toaster Ever Made?”